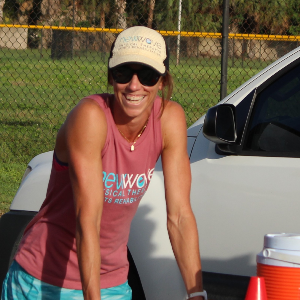 Kaitlin Donner is a Satellite Beach native who currently owns New Wave Physical Therapy & Sports Rehabilitation in Melbourne. Kaitlin graduated from Satellite High School, where she was a 4-time varsity letter recipient in cross-country, swimming and track. Upon graduation, she attended the University of Florida on a cross country and track scholarship and earned multiple SEC Championship team titles in cross country and indoor/outdoor track. After graduating with a Bachelors in Exercise Physiology, she stayed at UF for PT school, earning her Doctorate of Physical Therapy. Just prior to starting PT school, Kaitlin started racing triathlons and quickly earned her Elite license which allowed her to race professionally around the world and eventually qualifying for the US National Team for several years as well as competing in 2 Olympic Trials events. About a 3 years ago she decided to step away from racing to move back to Satellite Beach full time with her husband Ed, and dog, Roxy, to open an outpatient orthopedic physical therapy clinic to serve the athletes and active population of Brevard County. She now spends her time working with the local endurance community as a physical therapist, strength coach and running coach along with her husband and 2 year old son.