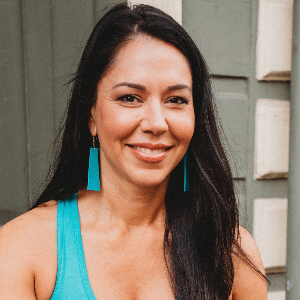 Kate has been running since 2002. She is a member of the Cochiti Pueblo Tribe of New Mexico and is proud to carry on the tradition and history of Indigenous running. In 2008, she discovered hot yoga and immediately wanted to share this healing modality with the world. She became a hot yoga teacher in 2009 and opened up a hot yoga studio she owned until 2021. In 2014, she became affiliated with Yoga Alliance as a Registered Yoga School and started to certify yoga teachers, Also in 2014, she and her husband, Kerry, former NFL player, opened Iron Tribe Fitness, a group fitness gym, in downtown New Orleans. In 2014, she created the non-profit,Native Strength Revolution. Through fundraising, NSR has been able to provide community leadership training and yoga training specifically for Indigenous people or people serving Indigenous communities. She believes yoga and mobility are key for the longevity of her running life!