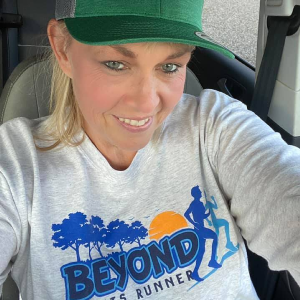 I began running in 2012 after losing 130 pounds through diet and exercise which consisted mostly of walking. I started running because I kept getting faster at walking and one day I just started picking my feet up a little more and before I knew it I was running….something I never believed I could do. From there I fell in love with the challenge of running and how strong and free it made me feel. I ran my first 5K that year. Over the next couple of years, I had several medical setbacks that made me put a pause on my running. Then in 2016, I was ready to get back into running and I joined a local Couch to 5K group because I wanted the accountability a coach and running with a group would give me. My goal was just to be able to run a 5K again and I met that goal. The experience of working with a coach and having a running group led me to set the biggest goal I ever imagined I would….to run a half marathon. I trained for three months and I completed that half marathon. Then I started to think could I possibly do something even bigger. From my work with my own coach I went from couch to full marathon in 12 months and to ultramarathon, 50 miles, in two years and 100 miler in four years. In total, I have completed over 100 races of varying distances since I began running. I never would have ever imagined I would become a marathoner or an ultramarathoner but I decided I wanted to challenge my limits. I had a coach who believed in me and my crazy big dreams and helped me reach them. This is what I want to do for other runners. I want to help them reach beyond any limits they believe they have and help them dream big and reach their running goals. So, whether you are looking to walk or run your first 5K or run your first ultramarathon I can get you there. Let’s go Beyond Limits together!