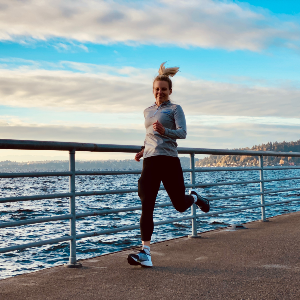 Running is for everyone. You can start at any time, you can be fast or you can be slow. You can be brand new or experienced. Your running experience is all about you. What do you want to get out of running? I’d love to help you get started running or hone your running skills. Everyone has a unique story that leads them to running, just like me! The day I ran my first mile I didn’t know if I could finish it or if I would ever run again. With encouragement from a friend I ran that mile, and later that week I signed up for a 6 month marathon training group. In December of 1996, I completed my first marathon. No one in my family ran or did anything athletic. With training, friendship and encouragement, I became a runner at age 29. Today, 24 years later, I am still a runner and interested in sharing my passion for running with others. As a mid to back of the pack marathon runner, my long shot dream was to one day qualify for Boston. It took 10 years of training and racing to qualify for Boston, with a lot of ups and downs, but my persistence paid off. In 2007 I ran my first Boston marathon, grinning from ear to ear! I continued to distance run after my daughter was born, but started to focus on the sport of triathlon when she was two. After years of racing Olympic and Half Iron triathlon distances, I decided to run a marathon again after a 7 year break. My goal was to get back to Boston at age 50. Three marathons later, I qualified again and ran Boston in 2017 at age 50. Once again, I had the time of my life. After Boston in 2017, I tackled another long term goal, the full Ironman triathlon – 140.6 miles of swimming, biking and running. At 51, I became an Ironman and completed another Ironman at 52. Running a marathon at the end of a triathlon is a great way to end a long day of endurance racing when are you are a runner! I look forward to learning your story and helping you with your running journey.