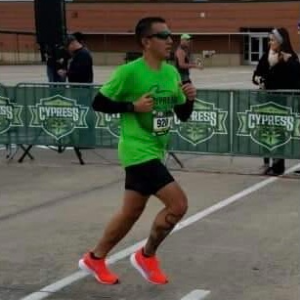 A Houston Native, Rudy’s passion for running exploded in 2014. Being a solo runner before he joined his Running Club- Cypress Running Club in 2017 with the hopes of getting better, stronger and faster. Also a Board Member of his Running Club, this has allowed him to further expand his passion for running for himself and others. His willingness to never give up, and never stop has allowed him to become an efficient runner with multiple Half Marathons and Fulls under his belt. Rudy is a Safety Manager during the day and runner all the other times. His next goal is to BQ in 2020!!!! Coaching is now a part of his life with one simple goal in mind-Help you reach your goals!!!